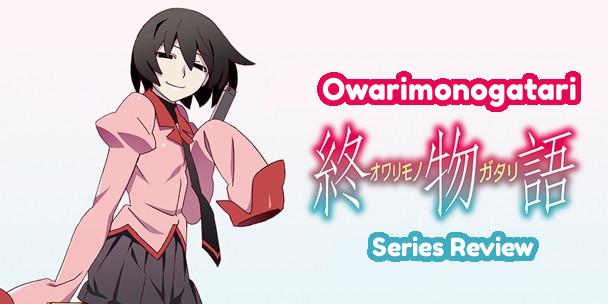 Owarimonogatari emphasizes the best parts of what the Monogatari series has to offer, but also caves to its most unnecessary fan service as well.

Owarimonogatari is the 7th entry in the Monogatari Series which follows high schooler Koyomi Araragi: a half-vampire that uses abilities and paranormal knowledge to help his female classmates solve their supernatural problems. Owarimonogatari’s 12 episodes are split between two main arcs. The first 6 episodes focus on Araragi being trapped in guilt over a girl from his past, while the second focuses on Araragi helping Shinobu, the vampiress that bit him, deal with a powerful force from her past.

Shaft makes visually interesting openings and all 3 of Owari’s are no exception.The weakest of the three, OP3 “Mein Schatz” utilizes the cutout versions of Shinobu and Araragi usually reserved for the endings. The Japanese storybook aesthetic looks stunning at parts, but unfortunately the song is forgettable and there isn’t much going on. OP1 “Decent Black” differs from the colorful pop openings that most of the other Monogatari girls tend to get, emphasizing Ougi’s eerie demeanor with a dark monochromatic palette and EDM-inspired song. Both the look and sound of the second opening perfectly set the tone for the enigma that is Ougi Oshino. OP2 “Mathemagics” is the best of the three with its emphasis on geometry and mirroring. The intensity of the strings and piano complement the mystery of Araragi’s memories and his guilt surrounding his former classmate Sodachi.

The Monogatari series thrives as an artsy, paranormal mystery and this arc perfectly encapsulates the visual and written style of the series that makes it so great. Shaft uses its typically absurd and surreal backgrounds to emphasize the uneasiness surrounding the event from Araragi’s past and the mystery trapping him and Ougi in the classroom. Even the background music with its restrained violins contributes to the foreboding atmosphere.

This imagery and Shaft’s quick cuts between still frames is greatly appreciated in an arc that boils down to a series of conversations. Unconventional angles and filters throw the viewer off, adding to the anxious tone of being trapped in a room that shouldn’t exist. The animators also find abstracted ways to convey what the characters are saying to keep the viewer engaged. Instead of simply having Araragi say that the class rep brought the students back in order, they show the desks shuffling back into line. Where they could have a shot of Araragi bowing his head and saying he was left out, they show his isolation as synapses carry messages that will never reach him. Through these visual quirks, Owarimonogatari manages to make two people stuck talking in a room for an hour interesting and engaging.

This arc also shows Araragi being vulnerable again. In more recent arcs, it seems like Araragi’s success is guaranteed. He has become more of a device for fixing problems than a character on his own. But all that changes when Ougi comes onto screen. Fans of the series may be excited to see more of the mysterious girl that has been stirring up trouble throughout Monogatari Second Series. Her presence shows that, as capable as Araragi has shown himself to be, he still has his flaws. He is easily fooled and manipulated by Ougi, who knows exactly what buttons to push. Her manipulation is even clearer in scenes with Hanekawa, who clearly sees Ougi’s deviousness and tries to loosen her hypnotic hold over Araragi.

This is Araragi’s story of guilt and resolution, but Ougi is pulling the strings. It will be interesting to see what her goals are going forward. It’s also refreshing to see Araragi confronting his flaws and reflecting on his past. This arc develops him beyond the hero-pervert that we’ve seen and shows us where his sense of justice and responsibility comes from. The interpersonal politics and the visual presentation is what keeps me coming back to this series and this arc nails it.

Unfortunately, the first act was hard to follow. This arc quickly starts off with fanservice and jokes about not wearing a bra instead of the usual quick-witted banter. Monogatari is known for having its stable of waifu-bait characters, but the previous arc showed how engaging the series could be without having to pander to otaku and their kinks every episode. This was more disappointing when Kanbaru, who had bad-ass fight scenes earlier in the series, had her fights reduced to quick cuts to poses of her making contact with the moster . The conversation scenes in this half of the season also rely on longer, less interesting still shots, making them more like droning monologues. The animators at Shaft can do good fights as well as interesting still conversations and it’s a shame to see them hold back here.

Though arc stumbles at first, it does regain its footing. Kanbaru does get more comedic banter in addition to her amped-up sexuality. Though Gaen has the tendency to monologue, the conversations between her, Araragi, Shinobu and Kanbaru become more engaging as they reach the climax of the arc. This story also has a simpler, clearer message than the first arc: confronting your problems, no matter how hard or cruel it may seem, is better than running away and ignoring them. Though it seems like a common sense lesson, it is especially poignant to see a character like Shinobu, a powerful, centuries-old vampire, struggle with rejecting her first servant reincarnated. Sometimes we need to be reminded that rejecting someone can be just as heartbreaking as being rejected, but trying to spare everyone’s feelings can end up sacrificing everyone’s happiness.

Source: Light Novel
Studio: Shaft
Episodes: 12, 24 min. each
Available on: Crunchyroll
Rating: 4/5. Owarimonogatari is my favorite entry in the series yet. The Ougi/Sodachi arc alone showcases some of the best this series has to offer in terms of dialogue and visuals. Though the second half has a rocky start, Kanbaru confronting Shinobu and her struggle makes it a worthwhile story. This might also be a good point for viewers that want to jump in now and then go back and watch the backlog, since the background needed to understand a few recurring characters is provided in these arcs.