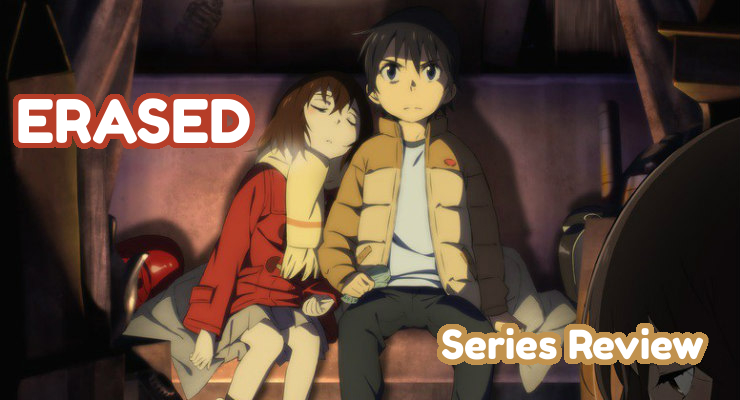 ERASED works better as a heartfelt character study instead of a murder mystery.

Satoru Fujinuma is a 29 year old struggling manga artist who works at a pizza place to pay the bills. Complicating his life is a mysterious ability called Revival that semi-randomly rewinds time to allow Satoru to avert tragedy. When a murderer from his past strikes again, the Revival throws Satoru 18 years in the past to give him the chance to save those he loves and stop the murderer for good.

ERASED’s OP “RE:RE:” is typical post-punk garage rock fare with shots of young Satoru playing with his friends and older Satoru in danger as he tries to outsmart the killer. Interestingly, many shots in the opening allude to Satoru watching himself like a movie. The show has a strong cinematic motif and it’s important to note these instances where Satoru watches him younger self. It suggests that Satoru is analyzing his life and choices as a movie, re-editing, re-shooting and playing back scenes from his past to achieve a better ending.
The ED “Sore wa Chiisa na Hikari no Yo na” is a wistful ballad with colorful minimalist art – an interesting break from the style of the OP and the show. However, the ED has less going on and serves mostly to show off cool art of the female characters.

As mentioned earlier, ERASED has a consistent film motif, and the show overall has a very cinematic presentation. Scenes in the present are full-screen, but scenes in the past are letter-boxed. Moving sprocket holes appear whenever Satoru compares his memories to see if anything has changed. The background music perfectly complements each scene and adds emotional impact, from warm acoustic guitars to sorrowful violins. Between the score and the way certain shots are framed, ERASED could easily be an entry at Sundance. In fact, film festivals have had a film about a man trying to use the Butterfly Effect to save a troubled young girl. It’ll be interesting to see if the live-action adaption replicates the indie film charm of the anime.

An intriguing part of ERASED is the idea I call the “Anti-Butterfly Effect”: unless you fundamentally change your mindset, you can travel back in time and end up making the same mistakes and changing nothing. This idea is the heart of Satoru’s story. We get to see him grow out of the protective walls he’s built around himself and allow himself to connect to others, even if it’s initially a pragmatic move.

Far less interesting is the central conflict of the story: solving the murder mystery. The murder is fairly obvious with a dearth of suspects and red herrings to keep the viewer guessing. At times it is frustrating to see Satoru and his friends fail to pin the culprit. However, this is not a failure on the characters’ part. Satoru and his friends are refreshingly competent, quickly putting together motives and intuiting each other’s intent. Instead, the audience is given a key piece of information that Satoru is not privy to and permanently puts the viewer steps ahead in the investigation. If the writers intended to load these scenes with dramatic irony, these instances came off more as aggravating than thrilling.

Instead ERASED finds much more success in quiet, intimate moments between the characters. The way Satoru grows as he interacts with the rest of the cast is the most gratifying part of the show. Seeing him treasure moments with his mother he previously took for granted and seeing him struggle with improving Kayo’s situation is incredibly touching. Through these scenes you begin to root for Satoru, not just for him to succeed but to save the characters you’ve become invested in. And each of these characters give a deeper look into why Satoru is the way he is and how he grows to change his mindset and in turn his future.

Source: Manga
Studio: A-1 Pictures
Episodes: 12, 23 min. each
Available on: Crunchyroll, Hulu
Overall: 4/5, Though ERASED was a frustrating murder mystery, its tender moments are compelling enough to make this a thoroughly enjoyable watch.